Kudos to ex-prez Randy Wilson for an impressive victory in Federal Court in hometown Abilene. D, charged with Possession of More than 5 grams with intent to deliver, had 2 prior drug convictions and faced 10 years to life. Undisputed evidence showed that while the D was being arrested, he was patted down twice before the officer discovered over 11 grams of meth in the pocket of his shorts. The defense charged that the Abilene PD planted these drugs because D had been arrested over 50 times, knew he was about to be arrested, and would not have come out of the house with any contraband—which was surrounded at the time by the Abilene Police Department Special Operations Unit and a Deputy U.S. Marshal. Randy convinced the jury that his client, a convicted drug dealer, did not have this meth in his possession. D testified that he was cuffed when he exited the house, then searched at least two times before being placed in the vehicle for transport to jail. He further testified that the person who found the methamphetamine in his pocket was the commander—after he was placed in the officer’s vehicle. The jury took two hours to return the big NG verdict. Quite a job there, Randy. Congratulations.

Kudos also to Greg Westfall of Fort Worth for his efforts in winning a new trial for his client in the First Court of Appeals. The decision reads as follows: “Molina contends the trial court abused its discretion in admitting evidence of contraband the State conceded belonged to his passenger. Concluding that the probative value of the evidence of the passenger’s contraband was significantly outweighed by the danger of unfair prejudice, we conclude the trial court abused its discretion in admitting the evidence. We further conclude that the admission affected Molina’s substantial rights and warrant reversal.” Way to go, Greg.

A shout out to Wade B. Smith of Houston, who won a recent Motion to Suppress in a DWI case. D was pulled over by a 36-year veteran officer of the HPD after he said he almost hit him and “kind of” ran a stop sign. D, who speaks little English, stopped and got out. Cop grabbed and searched him, cuffed him, then put him in the cruiser. DWI unit conducted SFSTs, though D refused blood draw. A warrant lead to a .237 alcohol content. At the hearing, Wade put the officer on the stand and crossed him on the absence of signs of intoxication, using the officer’s own body-cam recording. A portion showed the officer tell the DWI unit he thought he was intoxicated because he almost hit him in the parking lot. He told the unit that he didn’t see red, glassy, or bloodshot eyes, notice any issues with D’s balance, or smell alcohol. Through the officer’s testimony and the video, Wade established that the only facts officer relied on for his believing D was intoxicated was the driving behavior and what he called slurred speech. The judge herself said she couldn’t determine if the speech was actually slurred or if it was due to his difficulty with the language. And without something more than the driving facts, she said, there was no reasonable suspicion to expand the stop into a DWI investigation, granting the motion to suppress. Congratulations, Wade, on a good win.

Tip of the hat to Sean Hightower of Nacogdoches for his recent win in a big case. He notes that the state’s offer was 16 years in prison on “the largest drug case they’ve ever had.” Sean called on all his lawlerly skills, concluding, “Judge granted probation—after yours truly begged, pleaded, rolled my eyes, cursed under my breath, and talked about common sense.” Whatever works, counselor. On another note, Sean rates another congratulations for being selected a 2020 Rising Star, another TCDLA lawyer in ascendance.

Kudos to Mark Thiessen for his work in a recent case not always within his purview. As he explains: “Today was a nice closure for a young man who I have spent almost 2 years getting back on track. Charged with Aggravated Robbery for stealing a truck by point a gun to a stranger’s head, a judge gave him a second chance at life today. It was truly eye-opening to see what can happen if your child falls in with the wrong crowd. Had loving parents and never a problem until his senior year in HS. Then fell in with the wrong crowd and in 3 months confessed to 7 other Aggravated Robberies. Not a case for trial. So instead, I got this young man back on track and begged for mercy and compassion from the Court. Judge showed tremendous compassion and mercy and gave this man a second chance to get his life back. Walked in looking at 5 to 99 years. And he walks out with deferred adjudication. I look forward to seeing him at the end and how far he has come. This horrible charge and 3 months may just be the thing that saved his life and transformed him. Big THANK YOU to Judge.” And to you, Mark, for caring about him.

Shout out to David Mee of Allen, who just watched a client walk with a full dismissal in Montague County from a charge of First-Degree Arson. “Great expert out of Lubbock,” says David. “His report and my motion to dismiss seems to have carried the day. Thanks to Michael Payne out of Wichita Falls for letting me come in for some late briefing and bullpen help! Michael did the first three years of work. Happy to share any good results! First post in a dozen years from a former prosecutor.” Congratulations to both of our members for a job well done. It's time to show off our Rusty Duncan Speakers of 2020! Every Friday, TCDLA will feature two attorneys or experts. This week we're introducing Gerry Goldstein and Justin Driver. Register here: https://t.co/xgxNfC53km https://t.co/xxan6hxFjI
View on Twitter 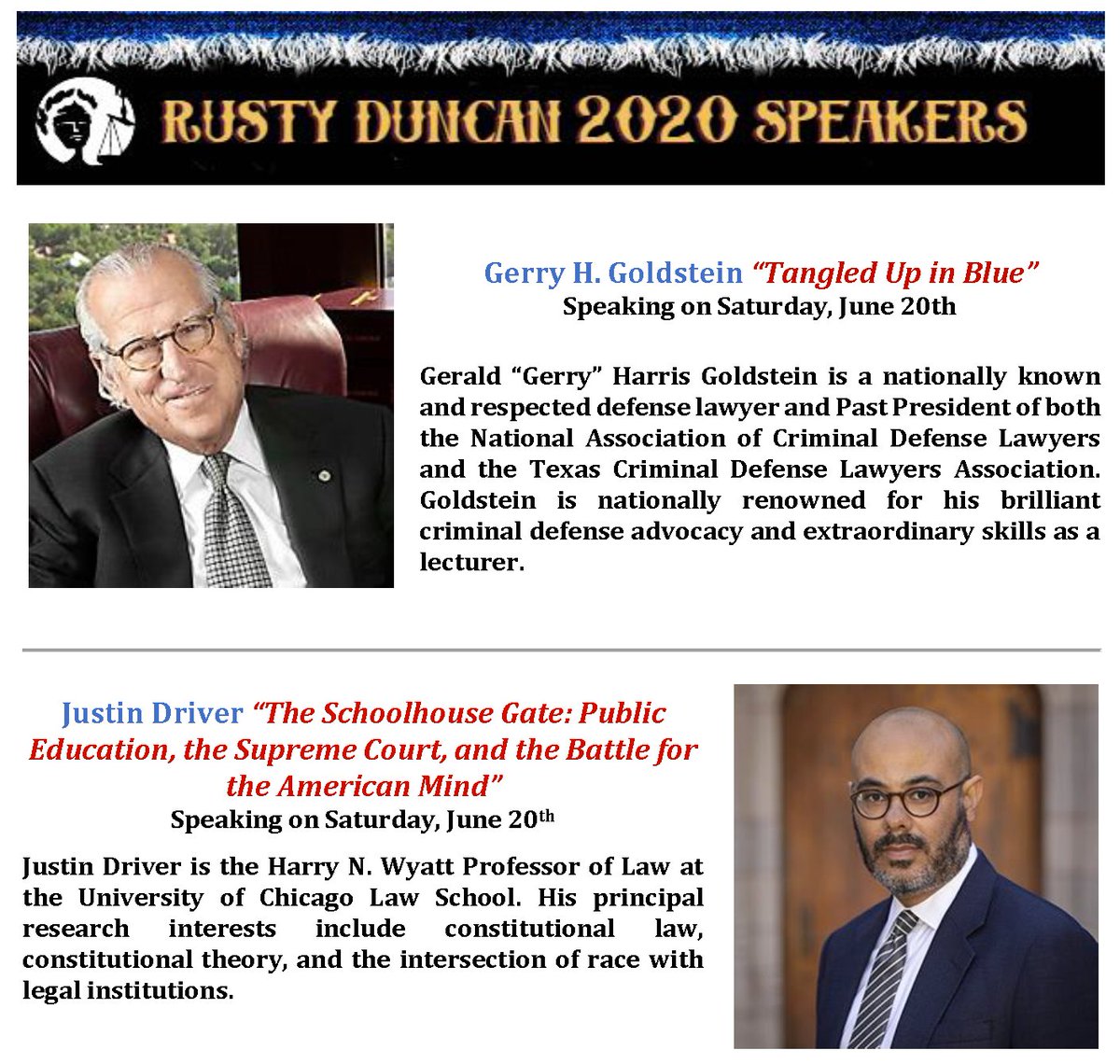 Good point @TarrantCountyDA. Do you guys delete mugshots from your Twitter feed that are expunged?? https://t.co/tmOcyAKiOo
View on Twitter
2
5

Ever feel like unleashing on a witness or the prosecution during closing argument after a long, arduous trial? Tap the brakes & ask yourself a simple question -- "does this argument win the case or does it just feel good?"
View on Twitter
2
5
Next Story

President’s Message: On the Agenda

As I put pen to paper, it is a cold January day.

There is always strength in numbers. The more individuals or organizations that

A new year. Another fresh start. It is hard to believe it’s

Ethics & The Law: Caution: Danger Ahead