Cowboy lawyer Gary Trichter is about to ride into the sunset like all cowboys do when the job is done. He has done his best to do the job he was elected to do. All the co-chairs have helped greatly in my quest to help our members. If you do not know them, you should reach out to them because you will never meet a finer group of people. TCDLA has made great progress this year, and the hotline has at times turned into a crisis hotline for some of our members having personal issues. We must continue to band together because the State Bar has offered little help for criminal practitioners defending the underdogs and those in our world who are accused of the worst of crimes. Watch the 6 o’clock news in any of the larger cities and it is shocking to see what some members of our society do to each other. As criminal defense lawyers it is our job to do our best to defend those people who do hideous acts. One tip for you is to do a three-generation family tree, and once you see where our clients have come from, it will help explain and not excuse their behavior. Being a real serious lawyer will change your life dramatically. You have a hard time relating to what I call normal people. You find yourself dealing better with dysfunctional people. All this takes a toll on your personal life, and that is why lawyers have higher alcohol, drug, and suicide rate than other professions.

Lydia Clay-Jackson is a lady I have known for close to 30 years, and she will bring new ideas and a lifetime of experience to TCDLA. She is also a woman who has risen to the top of her profession, and I hold her in the highest regard. She knows how to kick ass and take names and will make sure TCDLA continues to be the best bar association in the U.S.

A recent study shows that in federal court the majority of defendants are found guilty and cut deals with the government, so be wary of lawyers who make promises to defendants that cannot be met. That is the source of many grievances. From Loco to Laredo and everywhere in between, Texas has close to 100,000 lawyers. The great lawyers do not all live in Houston or Dallas, even though some think they do. We have great lawyers all across the state. On the other hand, not all lawyers behave as they should (as Don Davidson discusses in his article about Candor Toward the Tribunal, below)—and that includes prosecutors and judges. No matter where you are in Texas, do not put up with bad behavior from a judge or a prosecutor. Call the hotline or the strike force for help. And remember Texas Rules of Professional Conduct 3.09, which forbids threatening to prosecute a charge that is not supported by probable cause.

I can only imagine the horror the habeas attorney must have felt when he read these words in the Court of Criminal Appeals opinion:

In reaching this conclusion, we wish to remind Applicant’s habeas counsel that he is an officer of the court and is obligated under Rule 3.03 of the Disciplinary Rules of Professional Conduct not to mislead this Court. [citation omitted] In the future, we encourage habeas counsel to take greater care in his legal arguments and to be cognizant of Rule 3.03.1

Rule 3.03 of the Disciplinary Rules of Professional Conduct requires the utmost honesty and candor from an attorney toward a court or other tribunal. In his dealings with the court, Rule 3.03(a) forbids an attorney from knowingly (1) making a false statement of material fact or law; (2) failing to disclose a fact when disclosure is necessary to avoid assisting a criminal or fraudulent act; (3) failing to disclose an unprivileged fact in an ex parte proceeding if the attorney reasonably believes the tribunal should know of that fact to make an informed decision; (4) failing to disclose authority in the controlling jurisdiction known to be directly adverse to his position, unless already disclosed by the opposing counsel; or (5) offering or using evidence known to be false.

Of course, outright deceit and dishonesty will quickly run afoul of Rule 3.03. So goes the tale of an attorney who apparently got involved in a scheme to defraud the legitimate heir of a senile, elderly lady. The attorney had the old lady sign a new will—despite a diagnosis of dementia—and when he could not get a notary public to come to the hospital to notarize the lady’s signature on the self-proving affidavit, he took the self-proving affidavit to the notary. Since a self-proving affidavit, like any affidavit, must be signed in the presence of the notary, the affidavit was clearly invalid. But the attorney nevertheless filed it with the probate court, essentially vouching for its validity. When the truth came out, he found himself disbarred.2

Inexperience and stupidity are not defenses to a Rule 3.03 violation. Thus, an attorney was sanctioned for apparently trying to protect the interests of a former client by filing bankruptcy schedules on the client’s behalf, but without the client’s knowledge or consent.3 Another attorney was sanctioned for filing papers with the court on behalf of clients he did not represent.4

Before filing any document with the court, an attorney should be aware of Comment 2 to Rule 3.03, which states that “an assertion purporting to be on the lawyer’s own knowledge, as in an affidavit by the lawyer or a representation of fact in open court, may properly be made only when the lawyer knows the assertion is true or believes it to be true on the basis of a reasonably diligent inquiry.” Thus, an attorney who sent a letter to a court stating that a bankruptcy case had been reopened, and therefore a bankruptcy stay might be in effect, was sanctioned when it was later discovered that the bankruptcy clerk had told him that the file had not been reopened, and that he had never even bothered to visit the bankruptcy court to check the file.5

An attorney’s duty to be honest and candid with the court exists even if he is acting on his own behalf as a party to a lawsuit, rather than on behalf of a client. 6 In fact, the duty applies even when the attorney is not involved in the case at all. 7

And in the case of the duties under 3.03(a)(1) and (2), those duties “continue until remedial legal measures are no longer reasonably possible.” Thus, in some cases, an attorney has an affirmative obligation to correct a prior false statement, or to disclose a previously omitted fact, “as long as there is a reasonable possibility of taking corrective legal actions before a tribunal.”8

Winning a case is fun; I’ve never met a lawyer who didn’t want to win. But Rule 3.03 makes clear that we cannot do so at the expense of our honesty and integrity. If you neglect your duty to be honest and candid with the courts, a court may one day “remind” you of that duty in one of the court’s opinions—if you’re fortunate.

TCDLA ·
@tcdla
Every lawyer remembers how Bar Exam review courses made their tortured lives livable after graduation from law school. The book covers both State and Federal topics and is a must for anyone taking the specialization exam. https://t.co/arcVYxFfDY https://t.co/7cruh4rIUC
View on Twitter 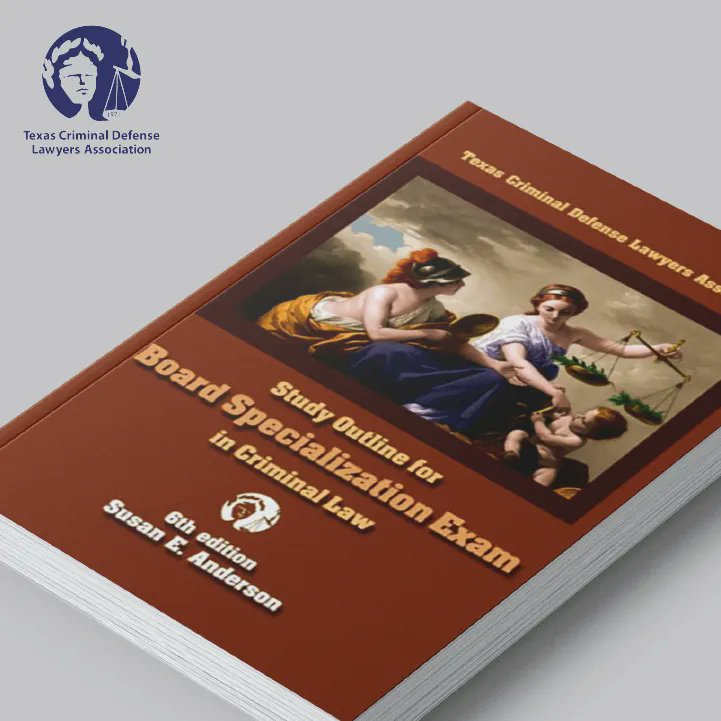 Executive Director’s Perspective: By the Numbers – By Joseph A. Martinez